It is an odd proposition – do worship leaders hide in worship? Even though they’re standing up front, in the most visible part of the worship space, leading the congregation in prayer and praise and acts of worship, are they hiding in plain sight? 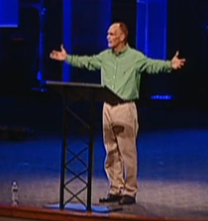 I’m struck after visiting two larger churches on Sunday – an evangelical megachurch, and a large Lutheran church. At neither service did any worship leaders wear robes. Use of a pulpit, lectern, or altar was minimal, and when a lectern was used it was an attractive but slim, minimalist stand. Much of the service took place with nothing standing between the worship leader and the congregation – no bulky altar, no robe, no imposing pulpit.

I saw the worship leaders’ bodies. Their movements and gestures. Their flesh and blood. There were no physical barriers separating them and us. They were open to us and to God. Nothing separated us. 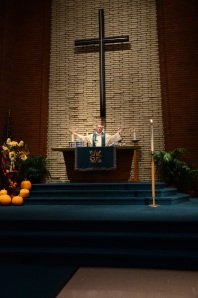 Presiding at the Eucharist, behind the large altar.

When a worship leader wears a robe, their body is somewhat hidden, their legs are not even visible. Standing behind a solid altar and pulpit, half of their body is obscured. There is something vaguely decarnating (rather than incarnating) about the use of altars, pulpits, and robes; that is, there is something about this experience that minimizes (or reduces) the humanity of the worship leader rather than embracing or accepting of the flawed yet real flesh and blood of the leader. When a worship leader wears a robe, the only thing that is not covered up is the head – prioritizing thought and speech over other aspects of their carnality. I wonder if we like robes precisely because of this decarnating, flesh-minimizing – even neutering – effect. That might be the case, but I think it could be to our detriment, and to the detriment of our mission. 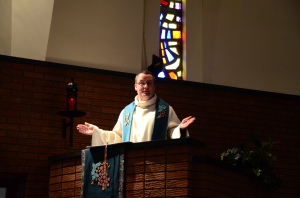 I understand that the altar, pulpit and robe all have their purpose and powerful symbolic meaning – drawing attention to the ritual act and the Word proclaimed rather than to the person leading that ritual act or proclaiming that Word. Nonetheless, I wonder if in our care to draw attention to the Word and Sacrament in such ways we don’t unintentionally create barriers and lose out on the chance to be a bit more honest about our carnality, our fallen flesh and blood, through which God promises to proclaim Good News and do great things. I wonder if we don’t miss out on the chance to cultivate a more personable, relatable experience of worshiping the God who comes to us in the flesh and blood of the person of Jesus Christ.

You’re not going to see me leading worship in jeans and a flannel shirt any time soon. But I am wrestling with this issue of how the way we worship shapes our messages, intentionally and unintentionally, for longstanding members and visitors alike. The way we use furnishings and liturgical garb in worship deserves scrutiny, particularly as cultural norms change over the years and the ways in which received patterns of worship may or may not carry with them the same meaning as they did in previous generations, particularly for those not raised within our church traditions.