There are other reasons I am leaving Father behind.

[See my previous post, Relationship: Parent, my most-viewed blogpost ever, for my initial explanation of why I’m leaving this term behind.]

For one, I increasingly reject gender roles. The terms Mother and Father are filled with notions of parental responsibility and care (good!), but are also laden with narrowly defined, culturally contrived gender roles (not good). I want to minimize the extent to which I emphasize gender roles  – consciously or subconsciously – in my parenting and in my life in general. Defaulting to the gender-neutral Parent is one, albeit small, way to do just that. 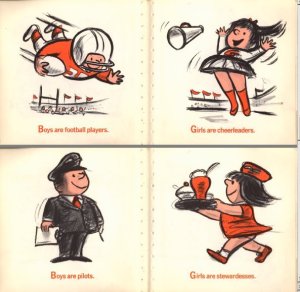 Culturally defined gender roles dangerously limit our understanding of who we are and who God created us to be. Men are supposed to be tough and emotionally barren. Women are to be pregnant with care and emotion. Men like sports. Women like crafts. Men hunt and protect. Women gather and nurture.

Sure, I get that there are some hormonal impulses that drive certain behavioral tendencies based on gender. Yet I also get that gender is not simply binary, and that culture and the power dynamics found within culture define – and limit – our understanding of gender and role much more than do any legitimate hormonal or biological frameworks.

Several years ago, when I worked as a youth director I attended a major youth ministry conference at which one workshop purported to help attendees “confront false sexual identities.” If we had a male in our youth group who acted too feminine (ie, who we suspected of being gay), we were to give him a set of tools and have him do masculine service projects. If we had a girl who was acting too masculine (ie, who we suspected of being lesbian), we were to have her join the ladies of the church in the sewing group or church kitchen.

Seriously. This is horrendous in terms both of its understanding of homosexuality and of gender roles.

But I don’t have to go to a conservative youth ministry workshop to find such gender stereotypes. Turn on ESPN and watch a few commercials. Or turn on Disney Channel during their pre-teen line-up. Walk through a mall. Gender stereotypes are alive and well in the twenty first century, and the pressures for our young people to live up to such gender-based expectations are much stronger than is our lip service about equality. 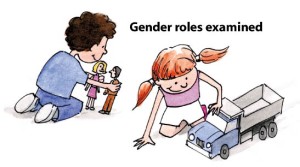 As a parent of three children, I want my children to grow up with fewer gender-based, culturally contrived expectations for their role, behavior, interests and abilities than I did. I don’t want my boy to be told to “suck it up and be a man” when he is hurt on the soccer field, nor do I want my girls to be told to “act like a lady” when they go out to dinner. What the heck does it mean to “be a man” or to “act like a lady”? Both of these admonishments tell children to live up to some contrived norm rather than live into their own identity.

Furthermore, I want my children to grow into their gender identity and affections comfortably. I want them to discover and embrace their sexuality in a healthy manner, guided less by princess tales or hero stories, or pressure to be attracted to or by the opposite gender, but instead by listening to their own bodies and feelings. I want my children to hear from their parents and their church that they are created beautifully in the image of God. I want them to fall in love with themselves, their God, and, in time, with a partner who will love them and see the beauty in them. Overly narrow gender roles stifle this process of healthy growth into one’s gender and identity.

Gender roles are being thrown at our children left and right by what they see on television, encounter in school, and experience in the culture at large. Has progress been made over the past two or three generations? Absolutely, particularly with the growing involvement of girls in sports and sciences, and women in leadership in the world. I am thrilled that my children can see a woman elected Presiding Bishop of our church, and women in leadership in politics, business, and throughout society. The growing acceptance of homosexuality is further sign that our understandings surrounding gender and sexuality are broadening and becoming more inclusive.

I hope that gender expectations will have less of an impact on my kids than they did on my generation or that of my parents … but I’m not sure that’s the case. I just think the impact is different than it was in years past. For all the progress that has been made, I worry about the simultaneous and opposing trend that is sexually objectifying girls, and teaching boys superiority and dominance, at ever younger ages.

As a concerned and caring parent, I want my children to be who they were created by God to be, with fewer gender-based cultural expectations hurled at them. Language has its limits, but it is also quite powerful. The ways I speak with them about who they are, who I am, and who God has made them to be, is one way I seek to minimize the collateral damage of gender role stereotypes in the lives of my children.