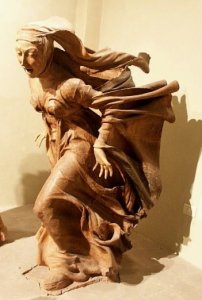 If running doesn’t yet have a feast day on the church year calendar, Easter should be the Feast Day of Running.

The Easter account tells of running – running to and from the tomb – in three of the four Gospels.

Matthew 28:8 “So [Mary Magdalene and the other Mary] left the tomb quickly with fear and great joy, and ran to tell his disciples.”

Luke 24:12 “But Peter got up and ran to the tomb, stooping and looking in, he saw the linen cloths by themselves; then he went home, amazed at what had happened.”

This Easter morning I will head out for a run at dawn, the time of day that Scripture says the women first went to the tomb.

With the women I will run.

With Peter and the other disciple I will run.

With fear and amazement and great joy I will run, for the Lord is risen. Alleluia!

Run the race of hope and promise. Run the resurrection. For this is why we run. This is the Feast of Running.