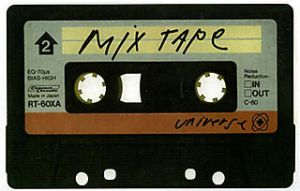 I  was very excited this week to download Electronic’s first album to my iPod (available via Amazon.com, not iTunes).  It was my first online music purchase – before then, I was just listening to old CDs that I had ripped to iTunes.  And truth be told, that purchase was just to replace the CD which I lost – or loaned – many years ago.

[For the uninitiated, Electronic was a wonderful early 90’s band bringing together Bernard Sumner of New Order and Johnny Marr of The Smiths.  Neil Tennant of The Pet Shop Boys also sang on several tracks of their first album.]

But alas, as the iTunes gods would have it, no Electronic in this week’s Weekly Mix Tape.  Here they are – ten songs, shuffled not stirred, from my iPod.  Have a great weekend!

After a long drought, here is my Weekly Mix Tape – ten songs, shuffled not stirred, from my iPod.

Goody Two Shoes – Adam Ant
Tonight I'm Free – Byker Grooove!
High and Dry – Radiohead
Who Are You – Dada
White Love (radio mix) – One Dove
Whip It – Devo
To Have And Not To Hold – Madonna
Where The Streets Have No Name – U2
Natural Blues – Moby
I Know It's Over [Live] – The Smiths

Ten songs, shuffled not stirred, from the over 1400 tunes from my collection:

Ten songs, shuffled not stirred, from the 1408 songs I’ve uploaded to my iPod.  Have a great weekend!

Ten songs, shuffled not stirred, from the 1400+ songs I’ve collected over the years and finally uploaded to iTunes.  Genres added this week: 80’s compilation CDs and my collection of Spanish-language music.

Ten songs, shuffled not stirred, from my new iPod:

It’s been a while since my Weekly Mix Tape made an appearance here.  I had only about 120 songs on my Inno, a cool combination XM Radio receiver and MP3 player.  Creating a random assortment of 10 songs from the same 120 songs was getting old.

But for Christmas Dad gave me an 80GB iPod Classic loaded with 4704 songs from his music collection.  It is so awesome!  Thank you Dad! (he reads my blog).  Earlier today I added about 800 song from my collection, with more to come.  Without further ado, the Weekly Mix Tape is back, and better than ever.  Look for it on Fridays.

The Lutheran Zephyr
Blog at WordPress.com.