You’d think it wouldn’t take much to learn how to give. Just reach into your pocket and give, right?

Of course, if you’ve ever spent time in a preschool, you know that there is often a reluctance in giving and sharing. Sharing toys doesn’t come naturally. Giving that toy to Bobby is even harder.

I was raised by parents who, each in their own way, were generous with their time and treasure. They modeled giving. As a young adult I strived to follow their model, often volunteering for and giving financial gifts to those organizations that were important to me, particularly the church.

But I didn’t start giving in a more significant, sacrificial way, until I met Larry. Larry hired me to work in the development office at The Lutheran Theological Seminary at Philadelphia. I was young, about to get married, and this was my first job where I was expected to wear a tie to work every day. I was working in fundraising, and after a few weeks on the job Larry asked me for my pledge.

Yes, Chris. I ask all of our staff, board members, and partners to give.

I’ve never made a pledge before, Larry.

Don’t worry, Chris. Let me show you what I do.

Then Larry took out a sheet of paper and wrote down some numbers. Combined annual income for him and his wife. Taxes. Savings. Various expenditures. Tithe. 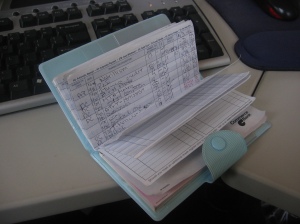 Larry gave away 10% of his income. Actually, he and his wife gave more. They gave to the seminary, but also to his church and to a few other organizations that were important to him and to his family. He showed me his checkbook register. He drew a pie chart and wrote numbers, showing me where their money went.

This wasn’t a generic textbook example. Larry was showing me his finances.

Stop right there. We all know that money, particularly how much you earn, is one of those topics that you don’t talk about in polite company. But Larry wasn’t polite company. He was plenty proper and polite, mind you, but this was more than that. This was the intimacy of a mentoring relationship. Larry was showing me how to tithe. Larry was showing me how to live out a practice of faith.

And all the while we’re talking about finances and bills and making ends meet, he’s smiling. His face is just lit up. He is animated. He references Scripture and the cross. He reminds me that all that we have is God’s and we are stewards of God’s stuff for the short time we have on earth. He takes out his most recent pay stub and says, “This paycheck belongs to God. It isn’t mine. I’m the steward. I’m called to use it for my family and for the good of others.”

He loves this stuff. It is clear to me that he loves to give because his Lord showed him how to give, because he loves the organizations to which he gives, and because he believes in their mission.

Yeah, but 10% or more? That’s a lot of money for a middle class family. 10% gets you all kinds of recognition at public radio or the museum or your alma mater. That’s the kind of giving wealthier people do, right?

I immediately doubled my weekly giving to my congregation, made a pledge to the seminary and re-prioritized some of my spending. My wife and I got married about a year later, and we made a commitment to work toward tithing. We got there after two or three years. And we’ve stayed there. We’re tithing, and we love it.

I am grateful for Larry’s faithful example. He not only taught me about faithful giving, but he showed me how to do it. He opened his checkbook and his life to me, and modeled for me a discipline of tithing. His wasn’t a textbook example, or general guidance to “give what you can” or “strive for 10%.” Larry gave me an explicit, here’s-how-we-do-it, model of faithful giving. Larry held my hand and showed me the way.

And it wasn’t just one conversation in his office. For the nearly two years that I worked with Larry, he modeled for me a life of faithful and generous giving.

We don’t learn faith disciplines – whether it is giving or praying or reading the Bible or serving others – simply by being told that such things are important, or by reading a book or attending a Sunday School class. We learn and grow into faith disciplines when others take us under their wing and how us how to do them. I am thankful for Larry, for his faithful mentoring, and for his willingness to take me under his wing and show me how to give.

[For more about Larry, read my previous post, Do it now. Go say Thank You.]

4 thoughts on “Learning How to Give”