Star Wars Rebels is a wonderful animated television series bridging the gap between Star Wars: Episode III – Revenge of the Sith (where Anakin Skywalker completes his transformation into the evil Darth Vader), and Star Wars: Episode IV – A New Hope (where Luke Skywalker rises up as a Jedi and leader of the Rebellion against the Empire). Star Wars Rebels tells the stories of a small band of rebels from the planet Lothal who resist the Empire with small scale vandalism and interference with imperial activity, but who at this point have not (yet) inspired or led a wider movement against the Empire.

Nonetheless, for their careful attacks and the presence of a Jedi among them, this band of rebels has garnered the attention of the Empire. Targeted several times for capture, they have skillfully eluded the Empire, but have also failed in their attempts to strike a bigger blow against the Empire.

In Vision of Hope, Ezra – a young boy among the rebels who is a padawan, or Jedi apprentice – rides a roller coaster of feelings. Early in the episode he has a vision that ignites in him hope that they can strike a significant blow against the Empire. Yet, the mission that forms from his vision – involving a senator the rebels thought was sympathetic to their cause, but who turned out to be working for the Empire all along – turned out to be a failure. 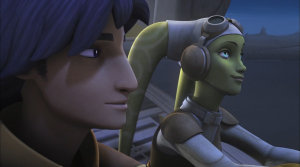 Screenshot from Star Wars Rebels episode, Vision of Hope. Ezra speaking with Hera on boarding platform of their ship, The Ghost.

At the end of the episode Ezra sits down with Hera, the pilot of the rebels’ ship. Reflecting not only the sense of failure from this mission, but from their several failed attempts to thwart the Empire, Ezra is dejected.

“What’s wrong with us?” Ezra asks.

“We have hope,” Hera responds. “Hope that things can get better. And they will.”

I love that Hera’s response to Ezra’s gloomy question – “What’s wrong with us?” – is not an answer about tactics, or manpower, or funding for their mission. And more, Hera doesn’t deny that something is wrong with them.

We have hope. That word hope looms large in the Star Wars canon, with echoes of Princess Leia calling out to Ben Kenobi in a holographic message in the original Star Wars movie, A New Hope. “Help me Obi-Wan Kenobi. You’re my only hope.”

Hope. Hope looms large in the Christian faith. Christians have a hope that all will be made right in God’s promised future. Isaiah 25 looks forward in hope to when all will gather at the Lord’s holy mountain and feast on rich foods and drink well-aged wine. Revelation speaks of a new heaven and a new earth. Paul writes of Christians being made into new creations. Mary proclaims of her yet-in-utero son that he will lift the lowly up and fill the hungry with good things, while knocking the mighty off their thrones and sending the rich away empty. And Jesus himself gives a glimpse of his power by healing the sick and raising the dead, offering a hope that what they done in his miracles will be commonplace in the coming Kingdom of God.

Yet, having hope can feel like a liability. “What’s wrong with us?” “We have hope.” Yes, in a world saturated in cynicism and self-reliance, having hope in a God who promises a future where death is no more and tears are wiped from our eyes is a bit strange. Belief in a God who forgives sin, raises the dead, and grants grace freely and even recklessly – well, that’s just plain bizarre. Most of what we see around us could cause us to lose hope, yet as people of faith we are also people of hope.

We have hope. That’s what’s wrong with us. We have hope, in a world filled with despair.